What is Stirlitz Media Inspector? 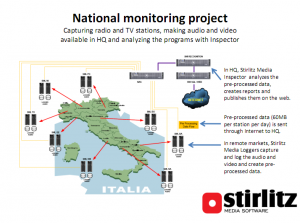 Stirlitz Media Inspector is developed for: 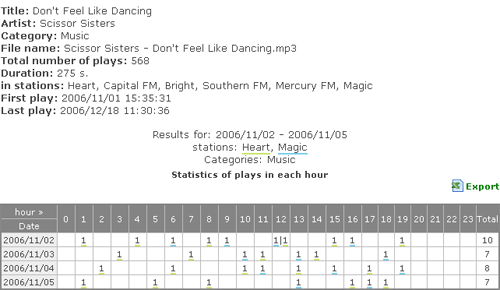 We'll show you how Inspector detects content and makes results available in a a standard webinterface, in SML Players and in an open database for integration with 3rd party solutions.

For a program that will reveal all music rotation secrets of your competitor, Stirlitz Media Inspector (SMI) works surprisingly easily. Just feed the server with the audio streams of the stations (analog, digital, terrestrial, cable, satellite, Internet) you want to monitor and import your own library from any of the main commercially available play-out systems.

From now on SMI will recognise every track played on the monitored stations as long as it ‘knows’ the track. The system even finds and presents the user a list of repeating unrecognised audio, allowing the user to quickly add the right metadata to this audio, or to mark it as ‘ignore’. Remaining gaps can easily be filled by marking the beginning and ending of a track and enter the metadata in the system. New releases can simply be copied to a folder and SMI will automatically load it into the system.

SMI achieves a very high recognition percentage with a minimal level of false hits thanks to its great tolerance for audio disturbances such as noise, crackling etc.

SMI generates various on-screen or downloadable reports. You actually see your competitors’ playlist shaping up in semi-real time, or you can browse back in history dragging the unique ‘Timeline’. SMI can compare rotations of multiple tracks on multiple stations and can even assist in re-creating your competitors’ clocks.

For the music and advertising industries SMI monitors rotations of tracks and ads on as many stations as you need.

SMI is the ideal alternative for slow, expensive and inflexible reports from monitoring companies.